Mpumalanga, a province located in the east of South Africa, is the home to eleven coal-fired power stations owned by Eskom, a South African electricity public utility. Katerina lives in Witbank, a small town in Mpumalanga. Like many other people who live in her neighborhood, she has to worry about the air pollution brought by coal mining around her house. Dust is the major problem for her – the water that they have access to is full of dust and her son’s chest is also filled with dust. A study of air quality in Witbank by a team of scientists from the European Union suggests that Witbank’s air is the world’s dirtiest. Figure 1 is a diagram of current coal and air situation in Mpumalanga.

Almost all the disadvantages of coal can be seen in this area. Not only can coal mining be harmful to human health, but also can cause death. A report by Eskom shows that air pollution caused by its coal mining is killing more than 20 people annually. The coal mining is destroying both animal habitats and human communities. The worst impact of coal in this area is that 37 million tons of CO2 is emitted into the atmosphere by the Kusile power plant, which contributes to climate change.

During my research for the past week, it bothered me to see that the coal is still largely used as a main energy resource in the world, even in the United States. So do people not care about the damages that coal can possibly make? Or does coal just have too many advantages to be replaced?

Figure 2: Everything You Needed To Know About That Lump Of Coal In Your Christmas-Stocking

Figure 2 shows things that one needs to know about coal. Indeed, there are many advantages of coal. First of all, it is a very cheap energy source compared to others. Price of coal from many places is very affordable. It also does not cost too much to build power plants that use coal as a major source. Second, coal is ubiquitous. Coal can be found in many different parts of the world. The three major countries that are abundant in coal are the United State, China and India. The abundance of coal also enables people to build power plants wherever coalmine is. Third, it is a relatively reliable source. The energy based on coal can be produced continuously while other renewable energy like solar and wind is not quite stable.

If we cannot find another energy source to replace coal, what can we do? The most important thing is definitely to improve efficiency level of coal use. According to World Coal Association, 1% improvement of efficiency of a coal-fired plant can result in 2-3% reduction of CO2 emission. Sadly, the efficiency of the most efficient coal-fired plants is only 45% while the global average is 33%. I believe that developing a more efficient coal-fired plant is urgent considering the damages that coal is making to our planet. While we care about our energy source, it is also necessary for us to think of the way that we are using energy in daily life. Therefore, educating people how to efficiently use energy is so important and it is the ultimate goal of my team’s energy challenge project.

Ever since electricity was discovered, people have been working hard to find efficient ways to store energy. Today, there are many technological approaches to manage power supply to create a more resilient energy infrastructure including solid state batteries, flow batteries, flywheels, compressed air energy storage, thermal and pumped hydro-power. Still, many scientists are looking for more efficient ways to store energy.

Figure 1 illustrates the discharge process of an AHI battery. This figure also clearly represents the inner parts of an AHI battery. What differentiates AHI batteries from others is their aqueous electrolyte made up by Sodium Sulfate solution, which enables the functional ions, including sodium, lithium, and hydrogen ions, to flow better. The battery’s anode (negative electrode) is made up with carbon, which has a high surface when activated. Therefore, the ions will attach to the surface of carbon while battery is charged and make the surface negatively charged. The cathode (positive electrode) is made up with Manganese Oxide, which allows “intercalation” reaction happen during discharge. This reaction is less corrosive and more enduring compared to electrode surface reactions that are commonly seen in other batteries. Figure 2 provides a more detailed diagram of the interaction between the two electrodes. There is also a cotton separator, which separates the electrodes in order to prevent a short circuit. Figure 3 is a diagram with internal features of an AHI battery unit. Each unit holds multiple sets of electrodes that are connected electronically in parallel. All these features make AHI batteries have excellent performance. Figure 4 is a graph of AHI batteries’ cycle life. With this unique technology, Aquino Energy developed products including S-Line Battery Stacks, M-Line Battery Modules and Bulk Energy Storage, which can be applied in different places.

When I think of batteries, it is inevitable to think about most batteries’ short durations and the damages that they could cause to the environment. It is amazing to see that today’s scientist always consider environment when they make new inventions. I believe more environment-friendly techniques for energy storage will be discovered in the future.

Carbon is an important element in all organisms. 20% of living organisms’ bodies are made up of carbon. Carbon is also the essential element that makes up the organic molecules. Carbon cycle is the process by which carbon is cycled through different parts of the Earth. Since carbon dioxide has a great effect on global warming, scientists pay close attention to the historical global carbon cycle in order to learn how the climate has changed throughout history.

Scientists often use the measurement of carbon isotopes in the fossils from a specific time to predict the carbon dioxide concentration in the atmosphere at that time. Isotopes are atoms with the same chemical behavior but different masses. The two common isotopes of carbon are carbon-12 and carbon-13. CO2 produced by burning plants are different than the CO2 that existed in the atmosphere as plants have a preference with the lighter isotope, carbon-12. Therefore, plants have a lower carbon-13/carbon-12 ratio than the atmosphere does. Once the CO2 produced by the burning of plants enter the atmosphere, it will lower the ratio in the atmosphere. Since the fossils are derived from ancient plants, they have the same ratio of carbon isotopes. Scientists compare fuels from different times to observe the change of carbon-13/carbon-12 ratio, which indicates the change of carbon dioxide concentration in atmosphere.

Recently the University of Miami Rosenstiel School of Marine and Atmospheric Science researchers measured the amount of carbon isotopes in both organic matter and carbonic sediment in a marine sediment core found in the Great Bahama bank. Their analyses showed that several periods of sub-aerial exposure during the Pleistocene ice ages, which took place over the past two million years, lowered the amount of carbon-13 in this sediment. Amanda Oehlert, the lead author of the study, stated that their research showed the importance of understanding the geological context of carbon isotope records.

Picture: the sub-aerial exposure surface found in the sediment

This study showed that the amount of carbon isotopes in sediment were not the accurate records of changes in the global carbon cycle since post-depositional changes could cause the shift of carbonate values in sediments. Therefore, the predication that scientists made about the change of CO2 in atmosphere through history based on this measurement could not be accurate at all. The study of global carbon cycle is important today as scientists are trying to find the patterns of climate change on the earth in the history. This study is essential to find a solution to the issues of climate change. It is urgent for the scientists to find a more reliable source to make predications about the global carbon cycle. The fact that UM researchers proved the traditional way of studying global wrong makes me wonder if there is any other scientific method that could be wrong.

“How Do We Know That Recent CO2 Increases Are Due to Human Activities?” RealClimate. N.p., n.d. Web. 17 Oct. 2014. <http://www.realclimate.org/index.php/archives/2004/12/how-do-we-know-that-recent-cosub2sub-increases-are-due-to-human-activities-updated/&gt;.

Nowadays many people spend lots of time indoor. Different social medias are taking away our opportunities to go out and explore the nature. Today’s children only spend around 20 minutes per day outside and this time continues to drop. The number of visits in both national parks and nature-based recreation has decline since 1980s. The modern life we are living now is much better than the one our ancestors had, but are we not missing out the benefits the beautiful nature might give us?

The study by Strayer and University of Kansas psychologists Ruth Ann Atchley and Paul Atchley has shown that immersion in natural settings could improve creativity. The study involved 56 people, with 30 men and 26 women at an average age of 28. These study objects were divided into 8 different groups to participate in hiking trips without any technology from 4 days to 6 days in Alaska, Colorado, Maine and Washington state. Among these 8 groups, 4 groups (pre-hike groups) took a 10-item creativity test the morning before the trip and the other 4 groups (in-hike groups) took the same test the morning of the fourth day. The in-hike groups had a much higher average score on the test – they got a 6.08 compared to a 4.14. There are actually two factors in this experiment – nature and technology. There is no direct evidence to determine whether the study objects’ problem solving ability is improved by the increased exposure to nature or decreased exposure to technology. However, the researchers believe that these two factors are strongly interrelated to each other that they are often seen as two sides of a coin.

It does not matter whether nature immersion experience directly or indirectly, by reduce use of technology, affects one’s creativity. What really matters is that we need to understand how important it is for us to connect with the nature. Richard Louv, the author of Last Child in the Woods and The Natural Principle, believes that connection to nature should be seen as a human right. I agree with him. I think today we are trying so hard to draw the line between nature and the human society but we forget the fact that we are also part of nature. I really appreciate the opportunities like hiking in the desert or sitting in the woods for twenty minutes. It helps me to feel connected to the nature. 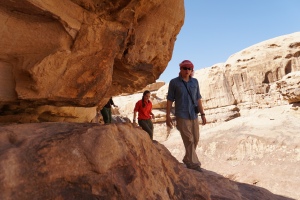