The University of Minnesota conducted a study analyzing the relationship between census data and nitrogen oxide concentration.   The study showed that race was the most important factor in who is affected by air pollution in America. “The difference in exposures to nitrogen dioxide (N2O) between whites and nonwhite was 38%.” (theeconomist) In order to understand the implications of this study, it’s imperative to understand the effect of N2O on the human body and the racial disparities within American society today.

In the United States, urban areas are “disproportionately non-white, with over 52 percent of blacks and 21 percent of whites residing in central-city neighborhoods; while suburbs are disproportionately white, where 57 percent of whites but just 36 percent of blacks reside.” (nhi) Basically, more Blacks than Whites live in urban areas. These urban areas are heavily polluted, because they are generally in closer proximity to highways and power plants; which are large sources of greenhouse gas emissions. Greenhouse gases trap heat in the atmosphere and keep the earth warm, this is called the greenhouse effect. When sunlight reaches the earth, land and water absorb it. Sunlight not absorbed is reflected back to space. The earth’s surface warms up and gives off infared radiation, greenhouse gases trap some of these infared rays in the atmosphere making the planet warmer. Figure 1 illustrates this process. 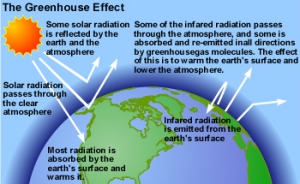 The University of Michigan Study focused on nitrogen dioxide, a common greenhouse gas, as the polluting agent.  Nitrogen dioxide moves throughout the nitrogen cycle, a “natural circulation of nitrogen among the atmosphere, plants, animals and microorgnaisms.” (epa.gov) Figure 2 briefly illustrates this process.

Fossil fuels include oil, coal and natural gas. The burning of fossil fuels, also called combustion, is used industrially and residentially for electricity and heating. In urban areas, fossil fuel combustion releases nitrogen dioxide.  This pollutes breathing air and adds nitrogen to the nitrogen cycle. The result of this is climate change attributable to the greenhouse effect and health issues for the people exposed to the nitrogen dioxide. Exposure to nitrogen dioxide causes health afflictions ranging from airway inflammation to asthma and heart problems. For instance, in New york the admittance rate for asthma is 1.8 per 1000. However, in the South Bronx, a predominantly Black and industrial neighborhood, the admittance rate for asthma is three times that rate. (nihl)

The correlation between race and exposure to pollution is tied to the prevalence of poverty in urban areas. Pollution and climate change are issues seemingly tied only to environmental justice. Environmental justice and social justice, however, are undoubtedly connected. The problems that pollution and climate change wreak on the globe leave the disadvantaged more vulnerable, even within the boarders of the U.S.  Tamara Rodriguez Reichberg articulates this idea when she says:

Recognizing that environmentalism reaches the heights of social justce is motivation enough to become more energy efficient.  Think about it this way, turning off a light is not only an act of environmental activism but also a step towards civil justice.

The earth carries out it’s cycles day by day without us even realizing. It revolves around it’s axis each day, concurrently revolving around the sun each year. It rains, the sky clears, it rains again. The earth seems to do what it pleases, without any respect to the measly human being. But we as a race have more power than we realize. Our actions change this earth, not always for the better.

fig. 1 Montaulk is an example of a beautiful beach in Long Island

Long Island is a beautiful region of the United States, popular for it’s breath taking beaches and serene oceanside environment. For years, tourists have flocked the sandy seashore, and fishermen have angled the plentiful amounts of crustaceans and aquatic creatures living underneath the surf for profit. But the seeming perfection of this environment has been shattered. New data and observations have shown that the Nitrogen levels of well known areas such as Westhampton Beach, Huntington Bay, Shinnecock and Flanders Bay have skyrocketed, forcing the oxygen levels toxically low. This increase in nitrogen has caused many sea creatures to either leave or die off. These aquatic animals need oxygen to survive. As the number of creatures in the area lowers, unrestrained algae takes over, turning oceans and bays an unsightly and unhealthy green.

fig. 2 In areas of countries like China, this algae increase has become extreme.

But why does this occur? The answer can be found in a lesser known, yet integral cycle of the earth: the nitrogen cycle. Nitrogen is required for life of all plants and animals. Without it, we could not survive. Seventy-eight percent of the atmosphere is made of nitrogen, as well as three percent of our own human body. Nitrogen can be found in proteins and nucleic acids, in other words, in foods, and in DNA. As you can now see, nitrogen, though invisible, is essential. But nitrogen in large amounts can be detrimental to our environment. Large amounts of nitrogen, in the form of pollution, have entered the Long Island waters by way of soil leaching and runoff. Leaching occurs when fertilizer added to the ground does not bind with the soil, due to the nitrate in the substance being negatively charged. Runoff includes that from the sewer and septic pipes.

fig. 3 The nitrogen cycle is a complex process, but is necessary to sustain life on earth.

Other polluting contributors include an outdated waste water system, the use of pesticides, and emissions from power plants and vehicles. As these factors add up over time, nitrogen levels heighten, oxygen levels decrease, and the sea creatures dissipate. But the fish and animals aren’t the only things to disappear. The increase in nitrogen affects more than just the wildlife. It can negatively affect the economy, as it is doing now in New York. Tourists are slowly disappearing, disliking the polluted water, that is steadily becoming greener with algae. The pristine, once picture-perfect beaches may soon be a thing of the past. The fishing industry suffers as well, as their copious supplies run low, and what animals that remain will be sickly and oxygen-deprived. The main economic frame of the area is bending and shifting, all due to too much nitrogen.

fig. 4 Seen in this image is an example of runoff. This runoff is coming directly from the sewers and has many negative affects on the environment.

It seems like there is not much that can be done. Big factories and corporations will not soon change their polluting ways, and nor will ordinary humans, most living their lives oblivious to the the existence of the nitrogen cycle and its importance. Though I usually try to see the bright side in situations, the future does not look promising for Long Island, and possibly other beaches around the country, and world. I believe that pollution, though promoted extensively in a negative light, will not decrease anytime soon. Fertilizers and pesticides are an everyday tools for farmers; they will not risk the health of their crops and cease to use these things. The world takes their white sand and blue rolling surf for granted, but if people do not soon learn of the nitrogen cycle, all will soon turn green… with algae.

Like many other nutrients, nitrogen is crucial for life on earth; nitrogen is needed for the production of nucleic acids and amino acids, which make up proteins, which in turn builds the very physical beings of organisms. Producers depend on soil bacteria to fix nitrogen gas into the form of ammonium or nitrate in order to use it. But what if one species of a producer consumed all the available nitrogen in the soil like a vacuum cleaner cleaning up dust? That species would grow as if it had its own personal fertilizer. Needless to say, that particular species would flourish, and other plant populations, on the other hand, would dwindle.

Mahtaab Bagherzadeh, an undergraduate at Virginia Tech, participated in a study of how rhododendrons (more commonly known as azaleas) disrupt the nitrogen cycle with their greediness for nitrogen. In recent years, there has been a trend in areas losing various plant species when they are densely populated with rhododendrons. Declining plant species include chestnut and hemlock. Figure 1 is an example of dying hemlock leaves. Figure 2 is an example of a healthy bough of hemlock. 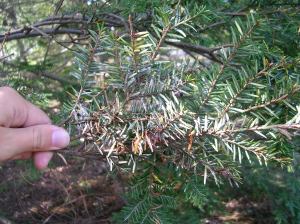 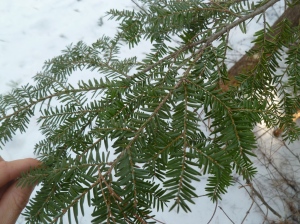 How does this nitrogen feud work? Well, microbes need nitrogen to sustain themselves as well. The relationship between microbes and plants is not one of commensalism; it’s not as if microbes exist for the sake of the life above ground. So they take whatever nitrogen they need and leave what’s left over for the plants. Rhododendrons release complex proteins that are difficult for microbes to break down. These proteins lock the nitrogen in organic compounds to create a hoard of nitrogen accessible to only rhododendrons. And without nitrogen, non-rhododendrons can’t survive.

Bagherzadeh and his advisor, Jeb Barrett, continue to study nitrogen and soil communities to address this issue with rhododendrons, but the take-away I am getting from this report is actually a reinforcement of the idea that these cycles and food-chains are more interactive with each other than a textbook would emphasize. Yes, nitrogen cycles through the atmosphere and the earth and so do carbon compounds. And yes, consumers eat producers before being decomposed into the ground by bacteria. But those cycles weave through one another, and if a species like the rhododendron disrupts a cycle, multiple issues pertaining to trophic interactions and nutrient cycles will ensue, not just ones respective to that one cycle.