Global warming, as we know, is caused by an excess of carbon dioxide in the atmosphere. A “side effect” of global warming that’s often referenced is rising ocean levels; however, it might not be clear that the rising ocean levels stem from the ocean becoming warmer. The ocean is naturally resistant to temperature changes because the hydrogen bonds in water form very stable bonds, so a large amount of heat energy is required to break them apart. This means that water can absorb a large amount of heat energy before its temperature rises. The rising temperature of the ocean illustrates how drastic global warming has become. 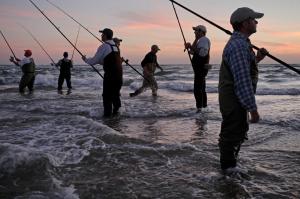 Since the ocean’s temperature is normally very stable, aquatic species are largely accustomed to a specific temperature within their habitat and do not respond well to change. Specifically, the North Atlantic cod has been shown to have difficulty adapting to the warmer water. Cod generally migrate late in the spring and early in the fall; however, with warmer water, that migration pattern could shift to much earlier in the spring and much later in the fall to avoid the warm waters. Cod could also move permanently farther north, or even stop migrating if there is no sea ice left at all. Some populations, particularly those farther south such as in North Carolina and off the coast of southern New England, would become entirely extinct by 2100 if the ocean temperature projections for that time are true.

Not only do New Englanders love to eat cod, but cod fishing is also a massive industry across New England and the North Atlantic. In the mid-1990s, there was a massive drop off in cod population due to overfishing. Since the population was so endangered that the New England Fishery Management Council said they were headed “seemingly inexorably, to oblivion.” In January of 2013, Congress passed regulations on cod quotas in the Northeast: cuts as much as 80% for the next three years off the coast of Maine. While this will hopefully help to raise the population of cod in the North Atlantic, it hurts the local economy. Fishery is a massive industry in New England, and such a drastic cut to an already declining population and struggling industry means that life will become even more difficult to fishermen relying on the next catch. Also, the warming waters might mean that cod populations will not increase to their former abundance even with highly managed fishing quotas. 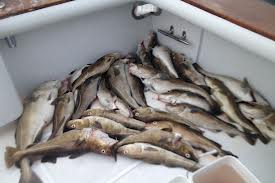 Scientists know that the declining population of cod in the North Atlantic is due to both overfishing and climate change. However, they are not yet sure what the best course is to fix it. Although fishing quotas have been imposed, those also injure the local economy and make it difficult to justify continued cuts on quotas. Additionally, cod is only an indicator for other fisheries across the globe. If all species need to move farther north to avoid warmer waters, what will live in the southern waters? Northern waters do not provide the coral reefs that southern waters do, so a multitude of fish populations that rely on coral reefs could become extinct. All of these issues are just as important as the impacts of global warming on land. The ocean takes up so much of our Earth’s surface, and we depend so deeply on the ocean, from water supply, food, transportation, recreation, and industry. I think we need to pay a lot more attention to what’s happening everywhere in the ocean, from the sea caps to the coral reefs, and including the smaller indicators, like cod, that show us what’s happening in a wider scale. 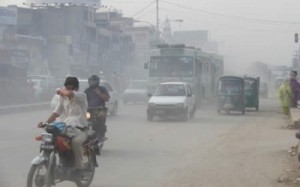 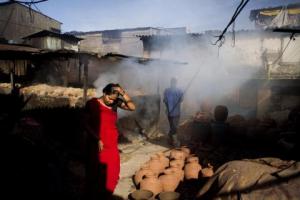 India’s government has made no move to combat the serious problem of indoor air pollution. Most Indian women and children spend the majority of their time indoors, leading to these massive health risks. Like China with the Under the Dome documentary, India needs something to spark public attention and make a move towards change. India is still developing, so it has the opportunity to be the first country to develop in an environmentally friendly way.

Living in New England, we have all encountered several blizzard warnings in which we are advised not to leave our homes. But can you imagine not being able to leave your home due poor air quality. For many of us this is unimaginable. How could the air quality within a whole country be so poor that one could not leave their home? For me, I actually lived through a smog epidemic during the summer of 2013 (Figure 1). This epidemic was so bad that the government made it illegal for individuals to leave their homes for about 3 days. Smog and excess air pollution is a chronic problem in Asian countries. This week I decided to dive in deeper and truly understand how smog build up occurs and why we see it so often in Asia. 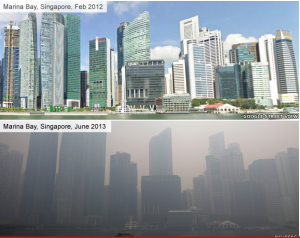 Smog by definition is the combination of smoke and fog. Smog is a black haze comprised of a mixture of pollutants (Figure 2). But how exactly is smog created? As previously mentioned, smog is essentially a combination of pollutants in the air. When these pollutants are burnt the fumes are then released into the air.  These fumes come directly from things such as heavy traffic, high temperatures, sunshine and calm winds.The smog we see today is called photochemical smog. Photochemical smog is when sunlight reacts with nitrogen oxides and at least one volatile organic compound (VOC) in the atmosphere. Examples of nitrogen oxides include car exhaust, coal power plants, and factory emissions. Examples of VOCs are include gasoline, paints, and many cleaning solvents. When the sunlight hits these particles it sparks the creation of fumes thus creating smog. Asian countries tend to have high populations thus resulting in an increase in the number of automobiles and heavy traffic. In addition, Asia being located near the equator makes for high temperatures and plenty of sunshine. These factors double the effects of smog and amplifies the effect.

Smog can be extremely detrimental to ones health and in some cases it can be fatal. Smog gives off an immediate effect and theres no gradual build up. Smog can cause minor health issues such as a cold and pneumonia. Although this is the case, smog can also be responsible for major health issues such as lung cancer. Smog is most commonly known for causing irritation  in the eyes and increasing the difficulty to breathe (figure 3). Smog also deteriorates plant life. With several pollutants in the air, this makes it difficult for plant life to prosper and continue to grow. More often than not plant life can completely die as a result of smog.

So what can you do to help? There several small actions one can do to reduce the amount of smog emitted in urban areas. First and for most, avoid driving if it is not necessarily. Try walking, carpooling, and or using bikes if everyone tries to do this smog emissions will slowly begin to decrease. In addition, fill your automobile with gasoline during the cooler hours of the day; this prevents gas fumes from heating up and producing ozone. Finally, if one cuts down on gas powered appliances and uses electrically powered appliances in stead this will also reduce the amount of smog.

The smog epidemic personally effected me and I am fearful that the problem will increase if we dont do anything about it. This problem can be reduced as long as we are aware and try and put forth our best effort to reduce the number of gas powered appliances we use!!! What will you do to reduce the effects of smog on our community?

Considering the fact that this blog is online, I am assuming that you are using a computer, smartphone or tablet to view this page. Now, I ask you to take a moment to reflect and think about how long you have been on this computer and how much electricity you have been using during the duration of this time. The average American spends about 5 hours a day on digital devices ( figure 1). Annually, that is a total of 1825 hours on digital media. Think about this, and think about how much it costs the average American to power their digital devices.  This means that the average American can spend up to 600 dollars just on electrical bills for their computer. However, what if there was a way to power your computer just using the environment around you? 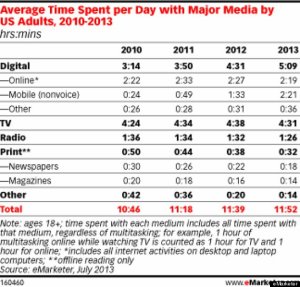 Companies such as Samsung and SOL have developed laptops that run solely on the energy from the sun. The computer developed by Samsung is powered by a solar panel embedded in the lid. In order to function the computer needs approximately 2 hours of sunlight to get 1 hour of working battery life. When fully charged, the computer battery can last up to 14 hours straight. This computer costs about $350 US dollars. Similarly the company SOL (known for developing devices using solar energy) developed a laptop which uses solar energy as well. This laptop is more efficient than the Samsung, as it is equipped with a detachable solar panel which can obtain 10 hours of battery life from just 2 hours of sun exposure (figure 3). This Laptop costs the exact same amount as the samsung computer, costing about $350 US dollars. By purchasing either of these laptops one would be purchasing a laptop $400 dollars less than the average computer and it is powered free of charge due to its solar panel technology. 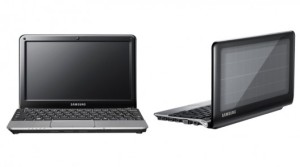 Converting to solar energy is 100% cost efficient and can end up saving you thousands of dollars (figure 4). Personally, I think that everyone should convert to solar power as it is a natural never ending resources that the earth has given us. Although one must pay for the initial cost of installing solar panels, in the long run solar panels save you up to 7 thousand dollars (figure 4). By using solar energy one can cut back on electrical bills and it makes for a more cost efficient lifestyle. Developing technology that allows computers to run on solar panels is truly revolutionary and I think that there is no better place to start converting people to using solar energy, than the devices we use on a day to day basis. 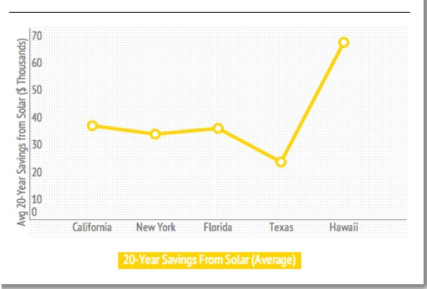